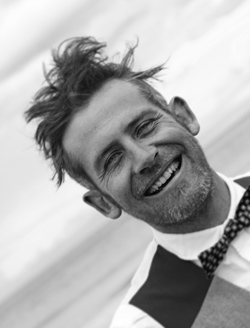 Skyboy is the creation of Dan Smith, a full time designer, fine artist, craft brewer and bar owner — which adds up to a whole lot of fun! Dan’s been working professionally for over 14 years, both in London and in Cape Town. He’s done a lot of work in that time for clients such as City of Cape Town, University of Stellenbosch, Milpark Education, Green Building Council SA, Schwarzkopf, SureTravel and IkamvaYouth, among others.

Dan believes that in our fast-paced and multi-cultural society there is a growing need for design to bridge gaps, challenge stereotypes and be accessible to all, as well as being beautiful to look at. Designs need to speak a common language and communicate faster and more effectively than the traditional forms of media that have long since become obsolete, but yet still manage to swamp and cloud our lives.

Dan is a personal and down to earth guy who takes the time and effort to educate and include his clients throughout the design process. He believes that this type of working relationship plays an important part in the success of the final product.

Oh, and he’s also a mean brewer, single-handedly responsible for bringing you the Californian Copperhead Steam Lager, soon to be served at a tap near you!